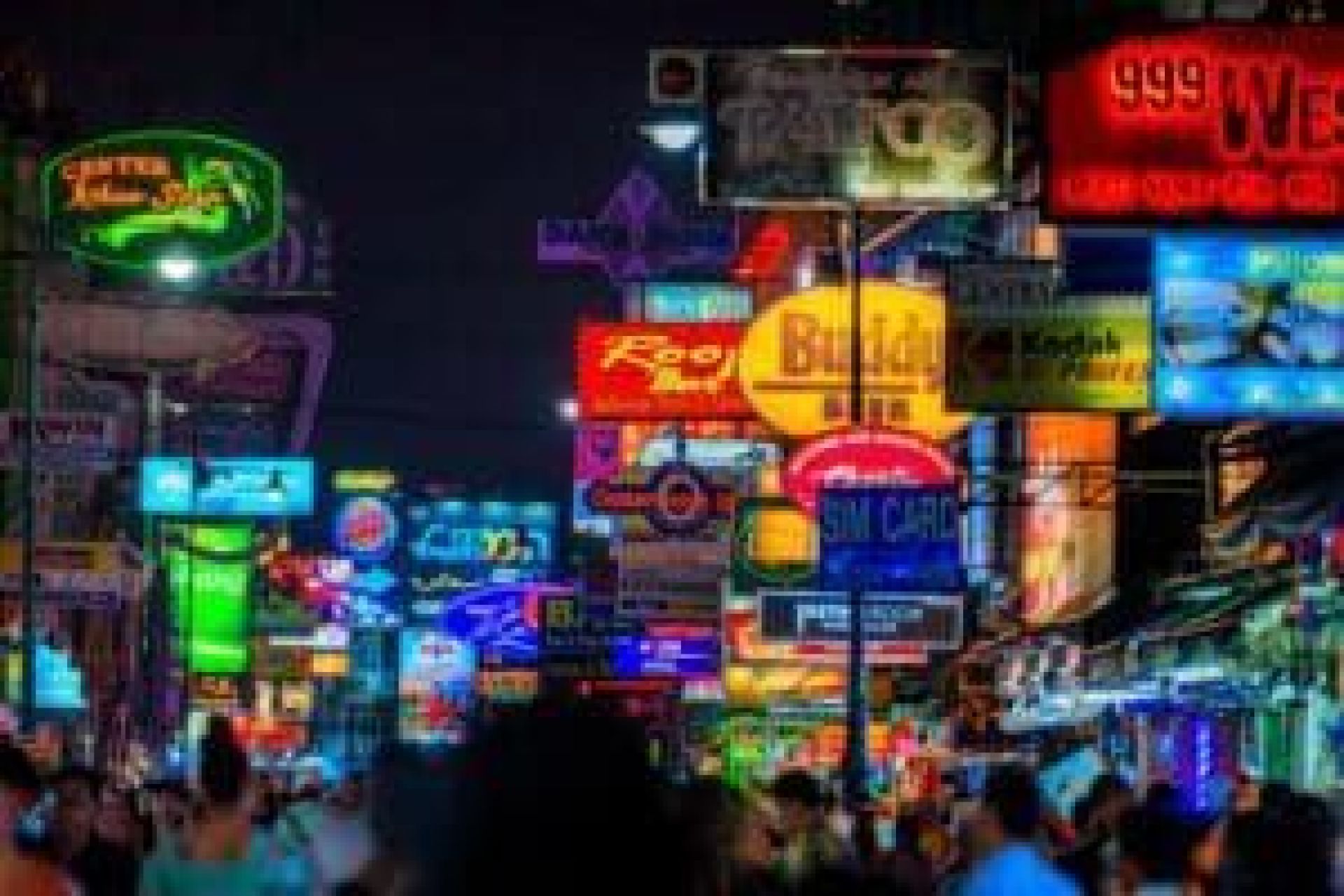 Heading to Thailand? The country has long been a popular tourist destination, particularly among backpackers, making this Southeast Asian country a party paradise. With so many bustling cities, beach towns, and over 1000 islands, there’s a lot of ground to cover. So, if nightlife is a priority for your Thai getaway, it might help to know the best places to go. Whether it’s rooftop bars in metropolitan cities or beach bars on a remote island, you’ll find what you’re looking for here. Here are some of the best places to go for nightlife in Thailand.

The nightlife in Koh Sumai is vibrant, diverse, and fun. The beer bars are in the thousands, you’ll find them in alleyways all across the island. By day, this island is a breathtaking mecca of palm-lined beaches, luscious rainforests, tranquil temples, sugary white sand coves, and turquoise sea. And by night, the blues, whites, and greens turn into neon pinks, oranges, and yellows. Chaweng Beach is the island’s main nightlife source, with a myriad of clubs, beer bars, discos, pool parties, beach parties, go-go clubs, and more. For something a bit different, head to one of the world-famous Thai boxing arenas. But there’s more to Koh Sumai than Chaweng Beach, other beach towns like Lamai, Bophut, and Maenam all have interesting and fun nightlife options to be discovered. 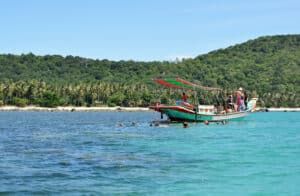 If you’ve heard started planning a trip to Thailand, or you’re considering the possibility of going, then we’re almost certain you’ve heard of the full moon parties. These parties made Koh Phangan famous all over the world, a celebration of the moon that’s developed into more of a reason to party the night away. The island is a mecca of nightlife any day of the week, but the (roughly) once-a-month full moon parties are the biggest nights on the island. Even if you’re not in Koh Phangan on a full moon, you can revel in the half moon and black moon parties. It’s not all partying until the sun comes up, though, visitors can enjoy the laidback, chilled vibes of beach towns like Baan Tai, with its open-air bars, clubs, and general cool atmosphere. 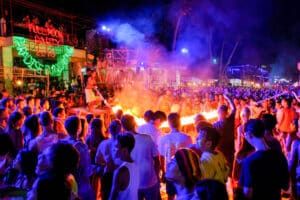 When you ask most people about Bangkok, they’re likely to tell you something similar. It’s too busy, too chaotic, and too many people – it’s sensory overload. Many people who come to Thailand do so for the paradisical islands, so it’s not really surprising that their first impression straight off the plane in Bangkok isn’t a great one. However, there is so much more to this city than chaos. If you’re looking for a wild, debaucherous, and unforgettable night out, you’ll get it in Bangkok. Khao San Road is the main artery of Bangkok’s nightlife scene, where night markets and beer bars come in the hundreds. Parties spill out onto the streets, marking Bangkok firmly as one of the best places to go for nightlife in Thailand.

This city’s reputation does precede it, so we imagine you might have heard of its red light districts. The three main red light districts are Soi Cowboy, Nana Plaza, and Patpong. It’s not all sleazy bars, there are fun go-go bars, cabaret shows, and plenty of beer bars. 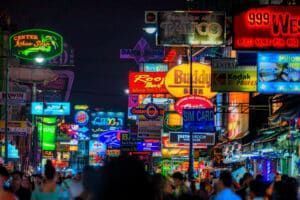 Pattaya is well known for its pulsating nightlife. The city used to be a sleepy fishing village and is now a resort similar to Bangkok. During the day, the city retains that sleepiness, with its beautiful beaches and peaceful temples. But by night, Pattaya goes into overdrive with roads packed with neon-lit bars, pubs, and clubs. It’s considered a very free place, and it’s even more hedonistic than Bangkok. But there’s something for everyone here, starting with the famous Walking Street. There are beer bars and discos absolutely everywhere, with music thumping from 10pm until the wee hours of the morning. As well as the Walking Road, the nightlife centres around Soi 6, Soi 7, Soi 8, and Soi Buakhao. 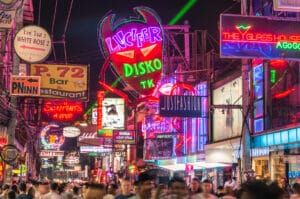 Chiang Mai is one of the most popular places to go in Thailand in general. It’s become a beloved favourite with frequent visitors, who can’t get enough of the city’s fascinating culture, incredible setting, delicious cuisine, and tantalising nightlife. It’s a peaceful city, but that doesn’t mean you can’t party the night away. The main areas to really let your hair down and get lost in beer bars and discos are Nimmanhaemin Road and Loi Kroh Road.

Loi Kroh is considered the city’s red light district, although it’s nowhere near as ‘seedy’ as other Thai cities. And a nice contrast to the go-go bars that we’ve seen in many of those cities, Chiang Mai has a beautiful stretch of riverside live jazz bars along the River Ping. They’re laidback and enjoyable, simply sipping on your drink, listening to soulful tunes, while taking in the view. You can even hop on a river cruise for a romantic date night of dinner and drinks. 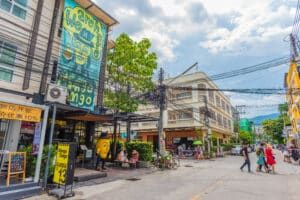 Phuket is the largest island in Thailand, a picture-perfect place of white sand beaches, sparkling clear sea, and luscious palm trees. It’s also one of the best places to go for nightlife in Thailand, with Bangla Road in Patong Beach serving as the de facto HQ of all things nightlife. It looks similar to the Walking Road in Pattaya, with its go-go bars, street performers, beer bars, and clubs. It probably wouldn’t be considered family-friendly, but it’s not as debaucherous as Bangkok or Pattaya.

The beach towns of Karon and Kata aren’t as crazy as Patong Beach but offer some great bars, restaurants, and clubs. One of the great things about Phuket is how diverse it is, so if you do want something more family-friendly, you can head to the classy and sophisticated bars of Bangtao Beach. There are loads of night markets around Phuket too, mainly in Phuket Town, where you can eat, drink, and watch the street performers. 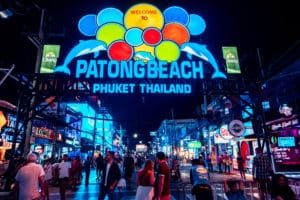 Koh Phi Phi is one of the most popular islands in Thailand. It gained popularity thanks to The Beach, a movie centred around a paradisical, mysterious island. Curious backpackers flocked to Koh Phi Phi to see what it was all about, and the nightlife scene grew. It is a small island, but there’s a lot to discover. The nightlife scene mostly centres around the beach bars and clubs, which give it a free, wild, and rugged vibe. Think drinks on the beach (usually coming in a bucket, rather than a glass), dancing in the sand, fire performers, local DJs. Koh Phi Phi is a party paradise and firmly one of the best places to go for nightlife in Thailand. 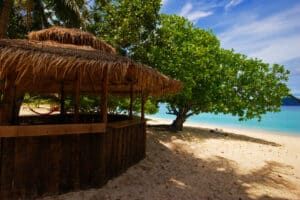 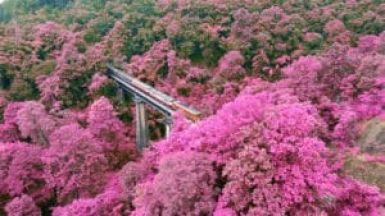