Toronto is one of the world’s most iconic cities for its diverse food scene, lovable locals, world-class entertainment and thriving arts culture. Whether you’re the type of traveller who loves to try new foods, dive into the local culture, learn the town’s history or just do some shopping, Toronto fits the bill. Thanks to an SNL skit by Steve Martin, Toronto is often coined as “New York, but without all the stuff” and it’s absolutely true. The Canadian capital is home to a plethora of world-class museums, shops, unique restaurants and an incredible melting pot of culture.

One of Toronto’s biggest highlights is its incredible diversity. It’s often listed as one of the most multicultural and multi-racial cities in the world and is known for its welcoming atmosphere of immigrants and travellers from all corners of the globe. More than 51% of Toronto region residents were born outside Canada – more than any other metro region in North America, and greater than London, Sydney, Melbourne, Paris and Amsterdam.

The global influence on Toronto can be felt all around the city – especially on the food front. One of Toronto’s biggest claims to fame is its thriving food scene. Whether you’re looking to cosy up with some savoury Jamaican oxtail soup, chow down on classic kimchi and bibimbap, or get a taste of Mumbai street food; Toronto really has it all.

Toronto is also known for its incredible art. All year round you’ll find world-class expos held around the city and some of the world’s best art galleries just waiting to be procured. The Gallery of Ontario is recognized as one of the most distinguished art museums in the world and boasts a collection of more than 9,000 works of art. Additionally, The Royal Ontario Museum holds the title for Canada’s largest and most comprehensive collection of art, culture and nature from around the globe. The Drake (no, not that Drake) Hotel is easily one of Canada’s most sought after accommodations. With just 19 rooms nestled in a once-bustling apartment block, The Drake provides just the right amount of ‘getaway’ from the hustle and bustle of Toronto without actually being far. Its quirky decor and creative style throughout speak directly to Toronto’s reputation for its arts scene, and the hospitality goes above and beyond the already stellar service found in Toronto.

Find out more about The Drake Hotel When it comes to luxury accommodation in the 6ix, Fairmont Royal York is a cut above the rest. This 5-star hotel is known for its vintage glam atmosphere that sings a song of 1929, the year it was built. Each one of the 1,329 rooms and suites is complete with just the right amount of luxury and style to make you feel as comfortable as possible. Throughout the hotel, you’ll find several lavish touches like hand-painted wood coffered ceilings and lavish ballrooms that have seen quite a lot over the years. It simply does not get more sleek, modern and stylish than Bisha Hotel Toronto. Complete with three incredible restaurants, a swanky lobby bar and a sprawling infinity pool, it’s no wonder Bisha is constantly hailed as one of Toronto’s best. The hotel is famous for its more than 3,000 carefully picked art pieces throughout making it almost more of an award-winning art gallery than a world-class hotel.

Find out more about the Bisha Hotel Toronto 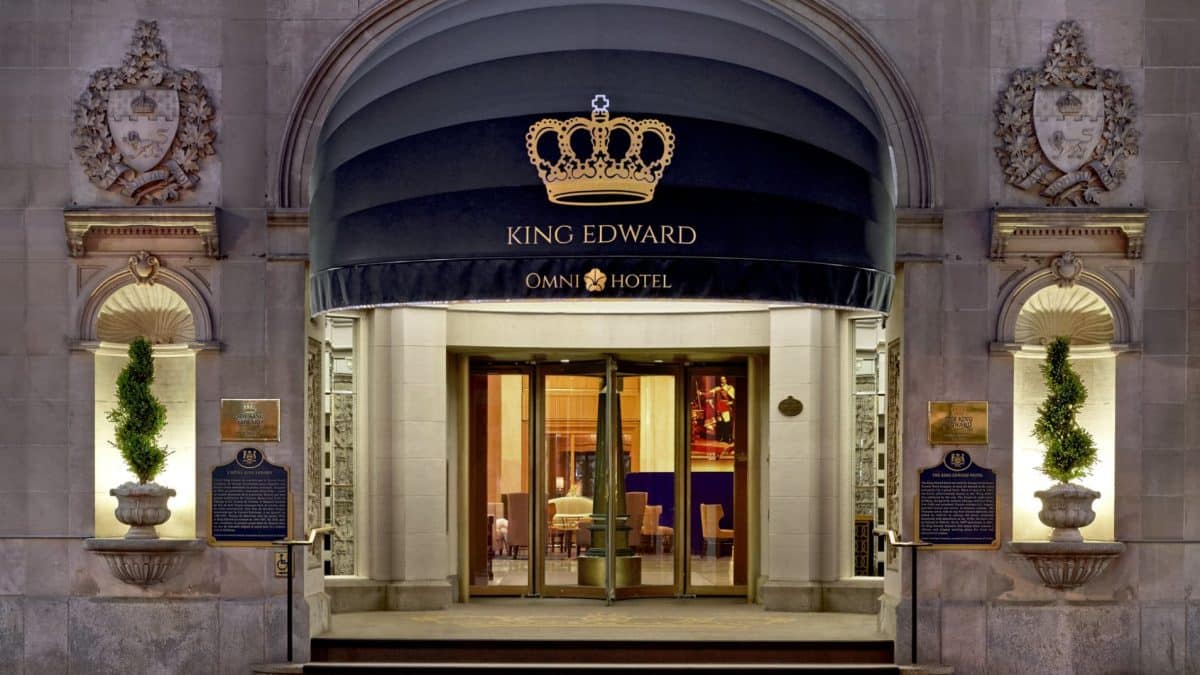 Omni is a globally recognized name for its extraordinary luxury and dedication to award-winning service. Built in 1903, Omni King Edward holds the title for Canada’s very first luxury hotel and expertly blends its turn of the 20th-century charm with a modern flare. Thanks to its rich past, the hotel is doused in trivia. For example, it was in the Omni King Edward’s Sovereign Ballroom that Elizabeth Taylor became engaged to Richard Burton. And John Lennon and Yoko Ono famously stayed in the Royal Suite before heading to Montreal for one of their famous bed-ins. If you’re looking for a sleek yet intimate getaway in Toronto, Hotel X fits the bill. This modern and stylish hotel is known for its bright and airy suites perfect for unwinding after a long day of exploring the city. When it comes to amenities, you’re all set. Hotel X is home to not one but two cinemas that seat up to 250 people and five BMWs onsite to give complimentary rides to Union Station and Toronto Island Airport. The Anndore House is where chic cosmopolitan style, warm Canadian hospitality and unbelievable convenience all meet. From the seamless digital check-in to the expertly styled suites with self-controlled lighting, to the onsite bar, restaurant and cafe; The Anndore has all you could want and need. There’s even a massage therapist from the nearby KX Yorkville who will come to the hotel upon request and a complimentary pass to the nearby Hone Fitness.

Find out more about The Anndore House The Four Seasons name is celebrated globally for its award-winning hospitality, top-notch luxury and exceptional quality from dining to spa amenities. Four Seasons Hotel Toronto lives up to the name and is one of the city’s best for anyone looking to really treat themselves on a Toronto holiday. From the 30,000 square foot spa complete with 17 treatment rooms and an indoor pool to the award-winning Café Boulud run by Michelin-starred chef Daniel Boulud; Four Seasons Toronto pulls out all the stops.

Find out more about the Four Seasons Hotel Toronto

What is the best area to stay in Toronto?
The Entertainment district ticks all the boxes, as it’s a cultural hub and entertainment hotspot for nightlife, shopping, and sports.
How many hotels are in Toronto?
The Greater Toronto Area has 183 hotels with a total of almost 36,000 rooms.
Is Toronto expensive?
Dining and hotels in Toronto, particularly anywhere near downtown, can be expensive. Expect to budget at least $150 per day of your trip.
What is the most expensive hotel in Toronto?
Trump International Hotel & Tower in Toronto is known to be one of the most expensive accommodations.
What is the oldest hotel in Toronto?
The Gladstone Hotel was built in 1889 and is the oldest hotel in Toronto.
Is Toronto walkable?
Toronto is one of Canada’s most walkable cities. A lot of Toronto actually is connected underground, so when it gets cold in the winter, you don’t have to freeze! There’s also the boardwalk, which allows people to walk across a lot of the city on the waterfront.
How many days should you spend in Toronto?
Plan to spend about 3-4 days in Toronto in order to see all the main sights.
What food is Toronto famous for?
Poutine! You also need to try the city’s veal sandwich, to be eaten in ‘California Sandwiches’.
How far is Niagara Falls from Toronto?
90 minutes’ drive from Toronto.
Where do celebrities stay in Toronto?
Toronto is usually a good bet for celebrity guests, thanks to Toronto International Film Festival (TIFF). Fairmont Royal York is a popular celeb hangout.