Famous for its world-class theme parks, balmy climate, and buzzing nightlife, it’s no wonder Orlando reels in so many tourists year after year. From Universal Studios to Disney World; from the Botanical Gardens to the Orlando Science Center; this Florida gem is loaded with activities to keep the whole family entertained. It’s often coined the theme park capital of the world, and it isn’t hard to see why. The entire city is peppered with them from the seven Disney Parks, three parks belonging to Universal Studios, Seaworld, and even Legoland. In addition to the infinite fun to be had at the city’s many theme parks, the food and drink scene is one of the best in the Sunshine State.

Much like the rest of Florida, Orlando is chock full of award-winning resorts and hotels. From the Four Seasons at Walt Disney World Resort to the Waldorf Astoria Orlando, there are plenty of options whether you’re visiting Orlando as a family, couple, or group of friends. Additionally, thanks to its size, there are a few neighbourhoods to choose from to be sure you get the most out of your stay. The most popular area is Lake Buena Vista which has easy access to Disney World, golfing, and shopping activities.

While the city is mainly famous for its plethora of theme parks, there’s also a huge roster of music festivals and cultural events that take place throughout the year. Simply put, Orlando is a place that you go for the theme parks and stay for the culture and arts scene. Four Seasons Resort Orlando At Walt Disney World Resort is a luxury 5-star hotel that’s located within the very gates of Walt Disney World itself. Rooms are modern and stylish, with views of scenic woodlands. There’s even a waterpark within the resort: the 5-acre Explorer Island water park which has slides and a lazy river. Guests can tee off at the Four Seasons Golf and Sports Club Orlando or relax after a day at the parks with a massage in the resort spa. There’s also excellent dining options. Looking for some Disney-style luxury? This incredible Victorian-inspired resort is the place to stay. Disney’s Grand Floridian Resort & Spa is the most opulent of all the Disney Resort hotels, with nightly light shows on Bay Lake, fine dining with butler service and a world-class spa. Plus, its location in Magic Kingdom means you’re close to all the action. This really is the crème-de-la-crème of Disney Hotels. 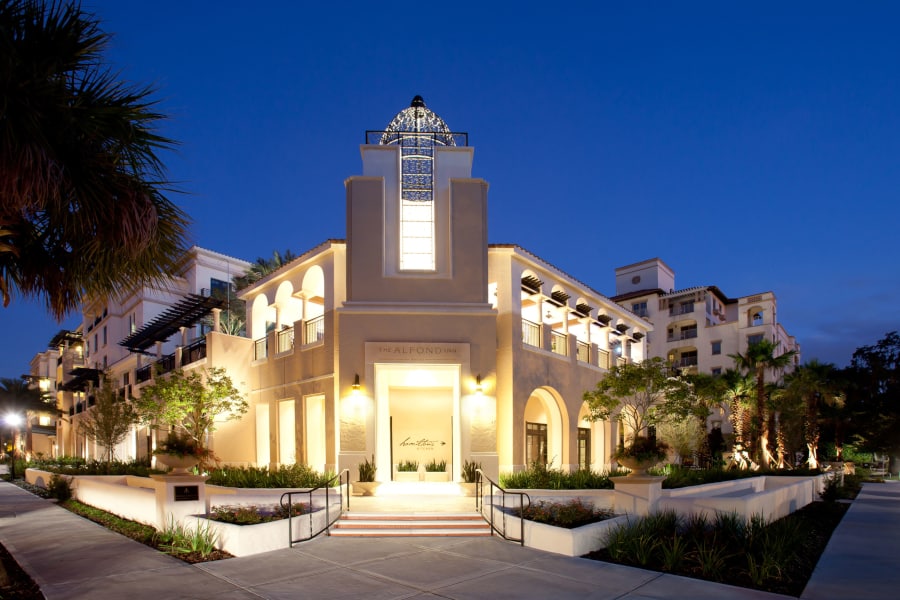 The Alfond Inn is a boutique hotel located in historic Winter Park, an idyllic city nestled north of Orlando, just 30 minutes from Walt Disney World. The 112 room hotel includes an award-winning restaurant, a pool and fitness center, and showcases The Alfond Collection of Contemporary Art for Rollins College, which is part of the Cornell Fine Arts Museum. Rooms have in-room wine fridges, cozy robes and slippers and the entire hotel is dog friendly.

Find out more about The Alfond Inn 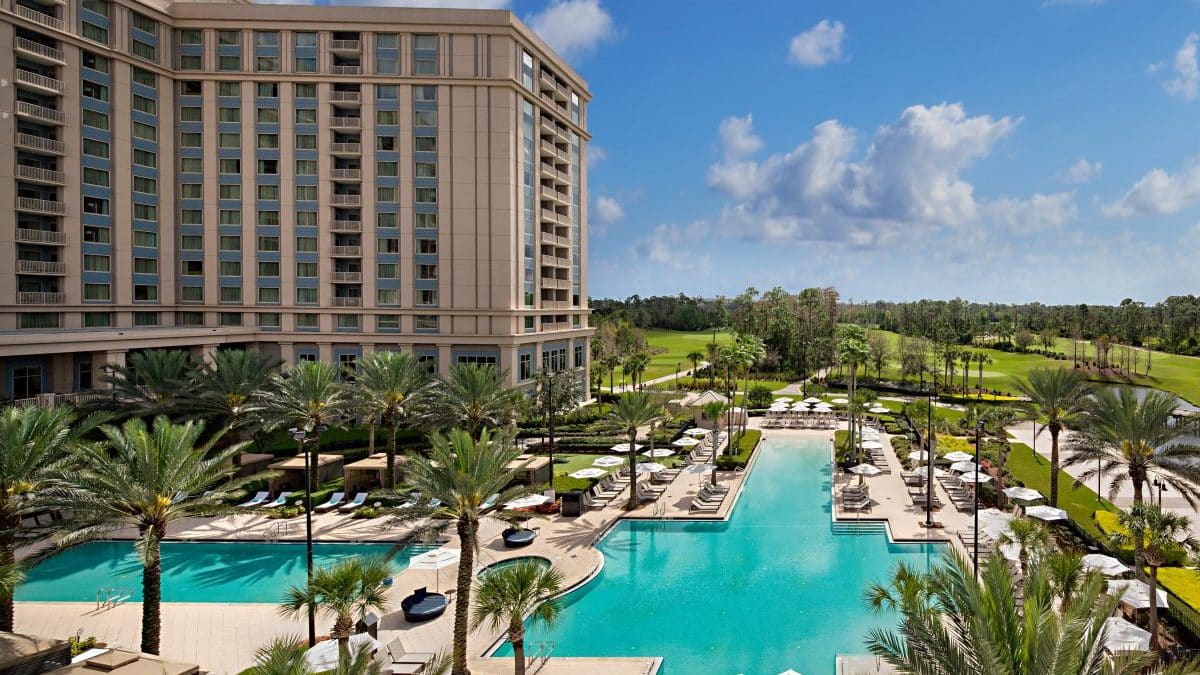 Located on a 482-acre nature preserve, this iconic resort has 502 deluxe guest rooms, including 171 suites and an 18-hole golf course. There’s impressive facilities around every corner at the Waldorf Astoria Orlando, including 12 restaurants. end the day relaxing by the pool in one of the private cabanas, or unwind with a treatment at the spa. It’s also an official Walt Disney World Hotel, so guests get special Disney benefits, including Disney’s FastPass+ Service and Disney’s Extra Magic Hour benefit.

Find out more about the Waldorf Astoria Orlando Discover the Great American Northwest at Disney Wilderness Lodge, which is designed to look like a mountain retreat, and is set in a pine forest just 3 miles from Magic Kingdom. Rooms have log cabin-style decor and all have private balconies to admire the views of woodland or lake. From incredibly-themed restaurants to a totem pole featuring all your favorite Disney characters and a geyser that shoots water 12-storeys high every hour, there’s endless fun to be had here. Disney’s Beach Club Resort is styled after the 19th-century seaside resorts of New England – perfect for a relaxing stay. The resort boasts a white sandy beach, palm trees and even a life-sized replica shipwreck, with rooms that echo the seaside theme in pretty shades of pastels with white wicker furniture. There’s also a spa, fitness center and tasty dining options. It has a superb location in the Disneyland-Epcot Center complex and is within walking distance to Epcot and a short boat ride to Disney’s Hollywood Studios.

What is the best area to stay in Orlando FL?
If you plan to visit the parks, the best area to stay in Orlando is Lake Buena Vista, the area where Walt Disney World is located. International Drive or ‘I-Drive’ is also popular, with a plethora of restaurants and top theme parks like Universal Studios, SeaWorld and Aquatica.
Does Orlando have all inclusive resorts?
Yes, it does. For a luxury couples’ stay, consider Rosen Shingle Creek on Universal Boulevard. If you want an all inclusive resort for a family trip, Four Seasons Resort Orlando at Walt Disney World Resort is perfect.
Where should adults stay in Orlando?

Orlando isn’t just for kids. Some of the best hotels for adults in Orlando include the Waldorf Astoria Orlando for access to the parks or The Ritz-Carlton Orlando, Grande Lakes, for pure relaxation.

How far is Orlando from the beach?

You’ll find the closest beaches on the Atlantic coast, which is just an hour’s drive from Orlando (about 50-odd miles). Beaches to visit near Orlando include Daytona Beach, New Smyrna Beach and Cocoa Beach.

What is the nicest beach near Orlando?
For family activities, Daytona Beach ticks all the boxes. Cocoa Beach is particularly beautiful, with a famed pier that extends 800 feet into the ocean, clean sand and gentle waves.
Can you walk from Best Western Lake Buena Vista to Downtown Disney?
Yes, the hotel is just a short walk from Pleasure Island and Downtown Disney. The hotel also offers a free shuttle to Disney theme parks, water parks, and downtown.
Is it cheaper to go to Universal or Disney?
Universal Orlando is slightly less expensive than Disney World, but not by much. Different age groups will have their preferences too: younger children will enjoy Disney World while older teens will likely prefer Universal.
Can you get around Orlando without a car?
It is possible to holiday in Orlando without a car, but it’s much more convenient to rent a car when visiting. Alternative options to getting around Orlando include public transportation, taxis, and hotel shuttle services.
How many days in Orlando is enough?
We recommend devoting a minimum of a full day to each Orlando theme park, so for a Walt Disney World trip the ideal time is four full days, one day in each park. You can then add on 2 extra days for Universal.
Is Disney World free on your birthday?
Sadly, the answer is no. But you can stop by any Guest Relations or Front Desk location to pick up a complimentary “Happy Birthday” button to wear on your birthday and you can also arrange a cake.