San Diego is half port, half city and all culture. In the southern heart of SoCal just north of the Mexican border and some 100 miles southeast of LA, it’s renowned for its idyllic climate, pristine beaches and incredible local culture. And in a state as colourful as California, that’s saying something.

San Diego’s history can be traced all the way back to 1542 when it was claimed by the Spaniards. Then, around 200 years later, the beginning of what we know as San Diego today formed. Thanks to its nearly 600 years of history, there are countless cultural, historic and religious sites throughout the city. Namely, the Mission San Diego de Alcalá built in 1769, the Cabrillo National Monument and the uber-Victorian Villa Montezuma. Even better, to get a taste of what life was really like in the early 19th century, head to the Old Town San Diego State Historic Park. It’s where San Diego was born and contains countless historic treasures along with loads of attractions for the whole family.

Then, there’s the food. San Diego boasts one of the best foodie cultures not just in California, but the US as a whole. In addition to world class Mexican food and incredible Cal-Mex food, you’ll find a huge host of local restaurants that showcase the region’s fresh produce and unpretentious natural foods. Looking for a fun night out? Head to the Gaslamp Quarter Pacific Beach, home to one of the most colourful nightlife scenes in sunny California. 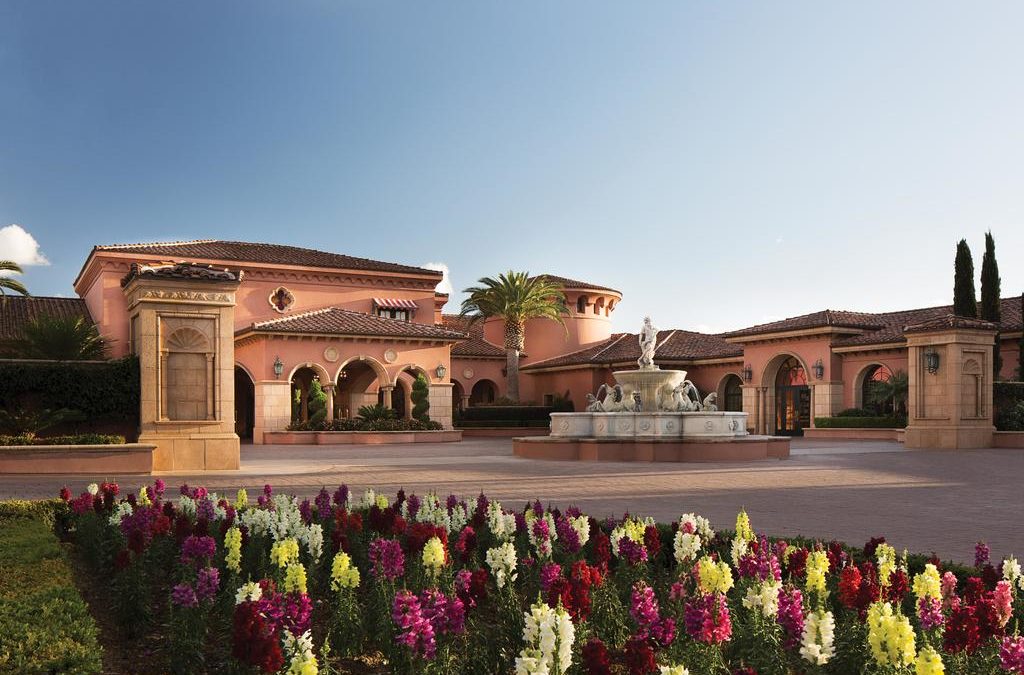 Fairmont Grand del Mar is a majestic, Mediterranean-style resort on 400 acres of lush gardens and canyon. Each of the 249 guestrooms and suites feature luxurious touches, such as marble bathrooms with deep soaking tubs. Room views look out over the resort gardens, The Grand Golf Club or Los Peñasquitos Canyon Preserve.

There’s lots to keep you entertained during your stay, including golf, four heated pools, tennis & pickleball, outdoor fitness center, and self-guided hiking trails. Want to relax? The resort spa is one of only 60 Forbes Five-Star spas in the world.

Find out more about the Fairmont Grand del Mar

2. The US Grant San Diego This historic, regal hotel has been welcoming guests for more than 100 years (it was built by the son of U.S. President Ulysses Grant).During Prohibition, the hotel ran a popular speakeasy; now its French-inspired cocktail bar is the place to hang out. You can expect all-out glamour here, with marble bathrooms, plush bedding, luxury spa and an Art Deco-style restaurant.

Its location in downtown San Diego’s arts and culture district makes it the perfect choice for exploring the city.

Find out more about The US Grant San Diego This pretty 23-room boutique hotel is midway between the beaches of La Jolla and Little Italy. There’s a distinct retro vibe, with funky mid-century design throughout the hotel that draws on the 60’s glamour of Palm Springs and the edge of San Diego. The heated oyster-shaped saltwater pool is a real highlight – perfect for snapping some Instagram photos. There’s a popular bar and restaurant, and the hotel hosts regular poolside events.

The Pearl Hotel rooms are super comfy, with Cali-style decor and vintage and local artworks.

Find out more about The Pearl Hotel

Cal-a-Vie Health Spa is an all-inclusive spa in the hills of North San Diego which was designed to look like it’s set within a French village, with surroundings of lavender fields and grapevines. Picture an adults-only summer camp, but one with a luxurious lap pool, gourmet food, fitness and spa treatments.

There’s 32 villas and suites, and stay packages include meals (made with ingredients from the resort’s organic gardens) and an extensive spa menu. It’s popular with the rich and famous, and doesn’t come cheap. This urban hotel is in San Diego’s up-and-coming East Village Gaslamp Quarter, where you’ll find hip, eclectic dining and nightlife options. The 235 rooms are bright and spacious, with pops of colour in aqua blues and chocolate browns and Mexican-style tiles. Solamar San Diego is known for its rooftop terrace, which has a firepit, heated swimming pool, cabanas and buzzing bar.

The Instagram-worthy terrace is a hot spot to hang out, as is the Californian onsite restaurant. There’s also nightly happy hours, a fitness center and some rooms have jacuzzi tubs and rooftop access. This Spanish Colonial-style hotel and spa is on 10 beautiful acres with a ranch vibe that’s the perfect setting for relaxation. The resort has 210 guest rooms and suites, a Moroccan-inspired spa (complete with a couple’s treatment room with outdoor tub) and heated saltwater pool. The entire place is made for lazy days, with poolside cabanas to soak up the sun,with cosy fire pits for night. You might recognise this hotel from the Marilyn Monroe movie Some Like It Hot! Located on Coronado Island, this Victorian-style resort has been an iconic beachfront vacation spot since 1888. Choose between Cabana rooms in the historic Victorian Building or oceanfront cottages and villas at Beach Village.

There’s seven dining options, a wellness spa, two outdoor pools and lots of activities. Guests can take surf lessons, do painting by the sea and beachfront yoga or enjoy a beachside movie night by a private bonfire with s’mores.

Is San Diego worth visiting?
Yes, if you are looking for good weather and interesting places to visit, plus it is home to some of the best beaches in the US.
How much is a vacation to San Diego?
For a 7-day trip, expect to budget $1,886 (solo traveler), $3,387 (couple), and $6,350 (family of 4), although this can vary depending on type and price of vacation.
How many days are enough for San Diego?
Staying at least 3 days is recommended, the city is full of culture and endless cute neighborhoods to explore.
What should I see in San Diego?
Balboa Park, Gaslamp Quarter, La Jolla, Little Italy and the Ocean Beach Municipal Pier, to name a few.
What is the hottest month in San Diego?
The hottest month is August, with temperatures averaging at 76°F.
What is the best part of San Diego to stay in?
If you want to be near the city’s top tourist attractions, downtown is the best place to stay. If you want to be closer to the beach, stay northwest of the city such as Pacific Beach, Mission Beach, or Ocean Beach.
Is there a rainy season in San Diego?
Yes, between November and March there is a chance of rain, however, the weather is usually warm year-round with a semi-arid Mediterranean climate.
What is the best way to get around San Diego?
San Diego has a growing transportation system (bus, trolly and ferry), walking and biking around the city are great options to really see the city.
How far is Los Angeles from San Diego?
Los Angeles is just over 120 miles from San Diego, it roughly takes 1 hour and 50 minutes by car.
Can you swim in San Diego in July?
Yes, you can swim year round in San Diego waters.