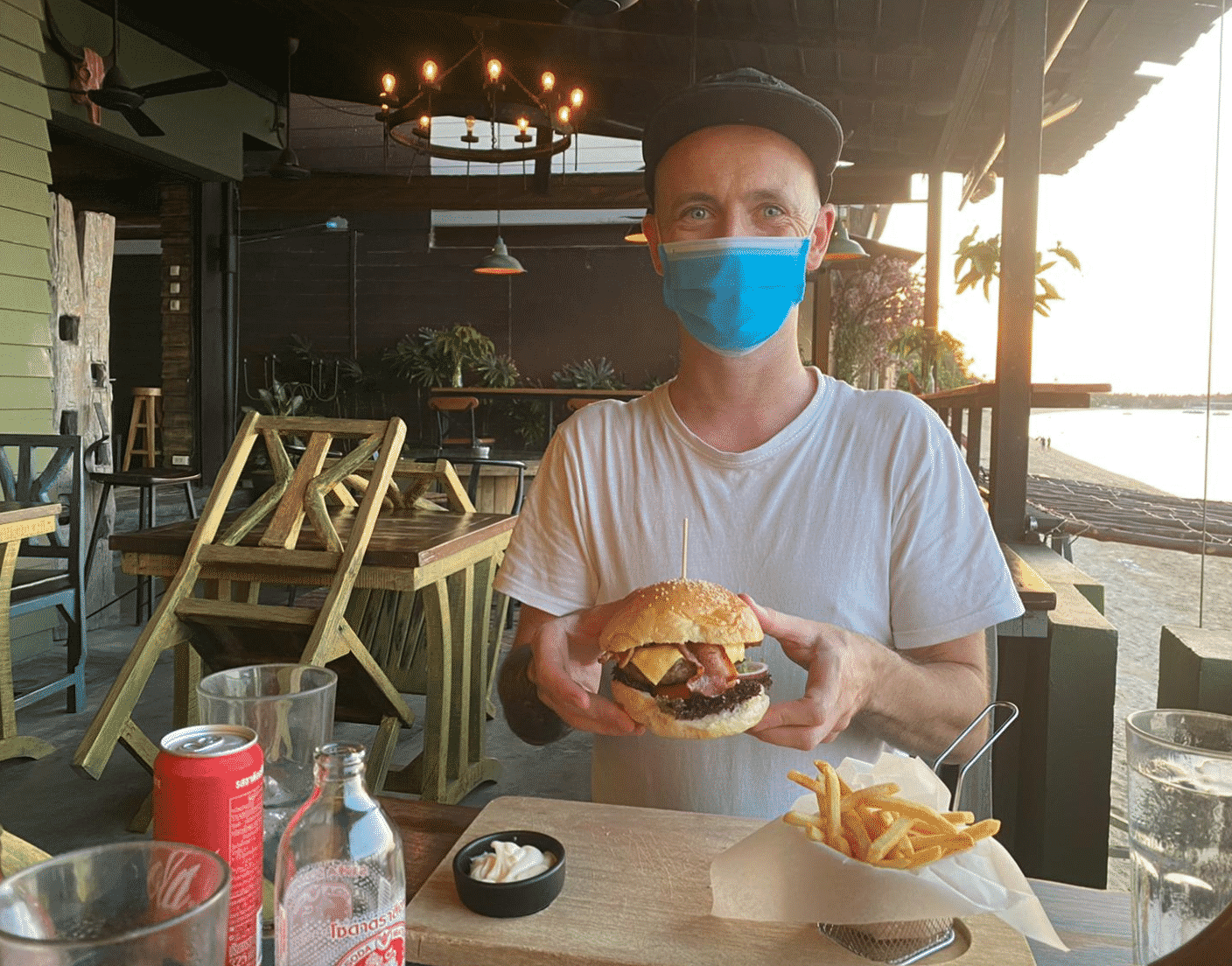 What It’s Really Like To Eat Out With Social Distancing: Dinner & Brunch Review

The world is slowly reopening. A key part of this “new normal” is the reopening of restaurants, with social distancing measures. What will that look like? How will it feel to eat out in this new environment, and will customers even return? Big 7 Travel set out to see what it’s really like to eat out in a restaurant where you have to wear a mask and steer clear of other customers. To get the full vibe, we (myself and my colleague Sarah) report on our dinner and breakfast experiences.

We are lucky enough to be in Thailand right now, where the virus seems to have been well contained compared to other Asian countries. Lockdown is beginning to lift a little. We have been following a list of strict measures in Thailand for the past 6-7 weeks, which included:

It is hard to tell what exact safety measures do and don’t work, but with just 54 deaths in a country of 70 million people, things seem to be working in Thailand. The government is now phasing out a nationwide reopening plan.

With regards to hospitality, this gives us a key insight into consumer experiences in other countries. Restaurants in Thailand can open for dine-in as of May 4th, although they cannot serve alcohol. Night No. 1 of reopening, we see what that’s like. We were about to get our first taste of dining with social distancing.

The first obligatory stop was at the hand sanitiser station, an absolute essential for all restaurants to have at the entrance. Temperature checks are also just something you do five times a day when entering premises here. Luckily, long gone is the fear of expecting your temperature to be too high to enter!

Steps like these now feel as engrained into life here as tying your shoelaces or putting on deodorant are. No stranger than walking through metal detectors at the airport; it’s all just woven into your daily life. 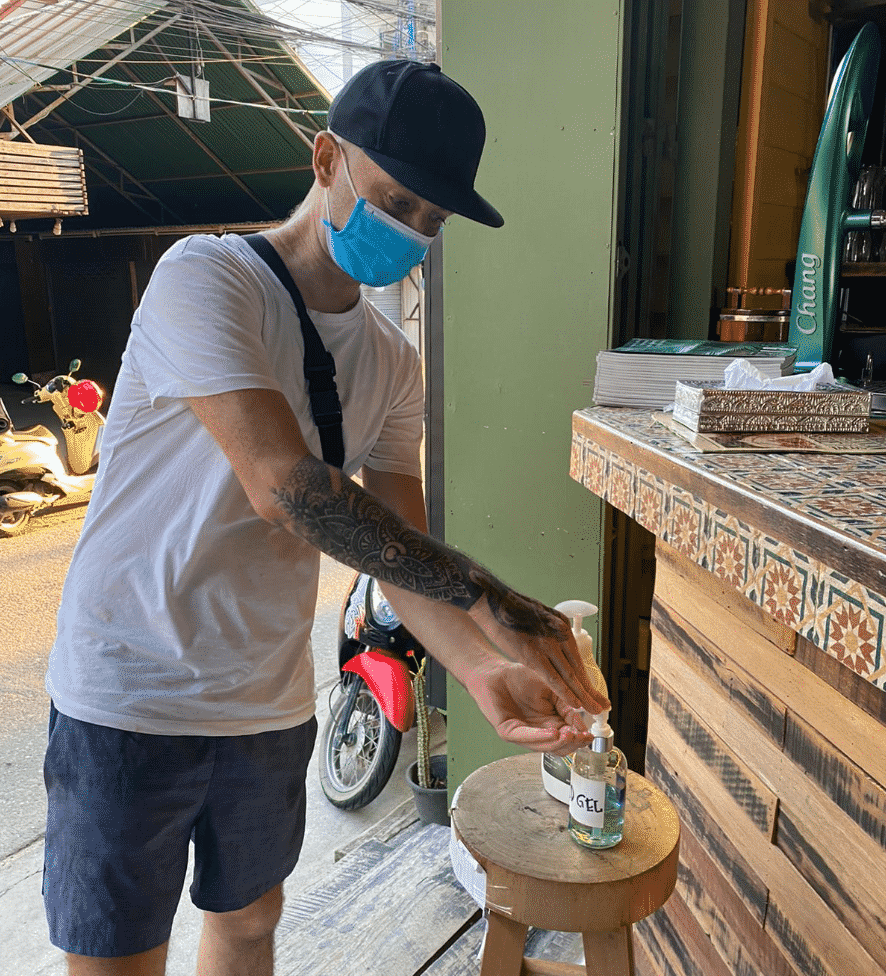 Not all restaurants here are open yet. It’s hard to discern why that is, but it could be a lack of demand, a ‘wait-and-see’ approach or the fact that some restaurants may no longer be viable.

We ended up picking a restaurant with a sea view, an open terrace and lots of fresh air. That’s not going to be an option for most city venues, but on a subconscious level it felt best to be as much “outside” as possible.

For the entire meal, we were the only customers in the restaurant (although another restauranteur did pop in for a coffee at one stage). Staff outnumbered us 6-2 and all wore masks.

Reading the menu was such a novelty. A forgotten pleasure. It was however, so daunting, that Sarah panicked and ordered a double cheeseburger. After pointing out to her that it might be way too big, she said “oh, I thought it meant double cheese, I’ve actually forgotten how to read a menu”. She was genuinely flustered by the array of choice. 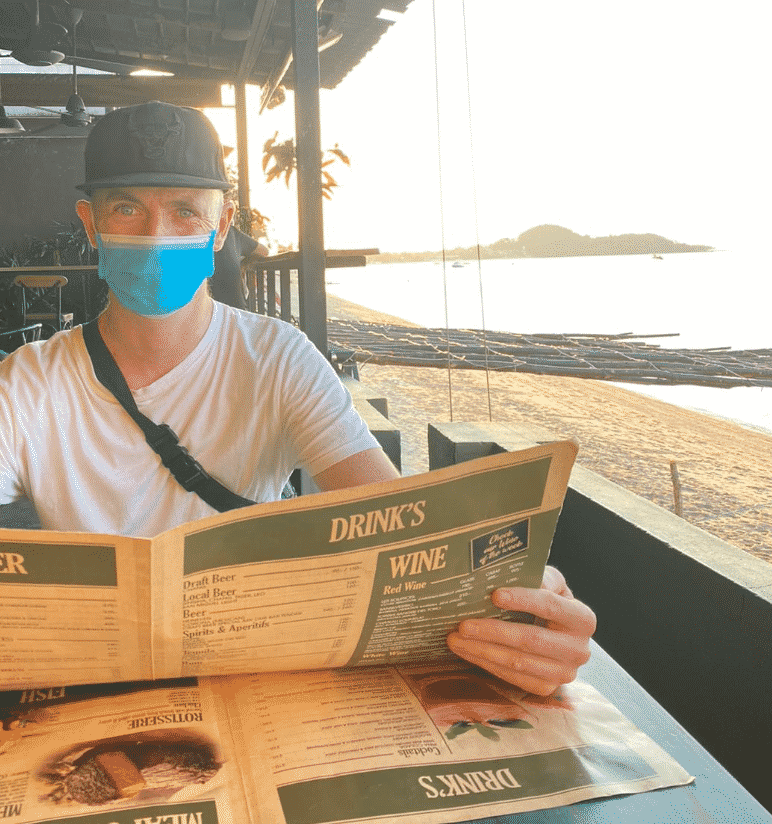 With half of the seats blocked off, no other customers, a ban on in-restaurant alcohol sales and having to wear masks, the atmosphere was muted.

A pretty boring dining vibe, you might even say.

We had a view to die for, the luxury of being served freshly cooked food and an experience that many people in countries in the likes of Europe could only dream of. But honestly? It wasn’t the least bit enjoyable. The food was good, the service perfect and you couldn’t fault one thing about their offering and their genuine attempt to make it work. But the overall experience was far from enjoyable.

It might not be that big a deal for everybody, but the lack of alcohol was actually a major factor. Much bigger than we thought it would be. With the sun setting over the beach, we were screaming out for a sundowner. Maybe a nice cold iced beer or spritz to set the scene for the meal. Usually you have some time to linger over the menu with a drink, but as the only customers the waiting staff were obviously with us in a flash, taking orders instantly. The food was whisked out to us from the quiet kitchen in record time.

With soda water to sip on, overly prompt service and no other customers, we were finished dining in about 25 minutes flat. Looking across the table at somebody wearing a mask and being served by somebody who is clearly happy to see you, but unable to fully show off that smile is disconcerting, and quite frankly, not that enjoyable.

Basically, the social side of eating out has been stripped out for now.

Sarah succinctly noted as she slipped her mask down to eat that as “I’ve been in lock down with you for six weeks in the house this doesn’t exactly feel like a special experience”. She was right. We had nothing new to say to each other that hasn’t been repeated ad nauseam. Maybe you wouldn’t mind the unusual dinner experience if you were properly catching up with a friend or family member? 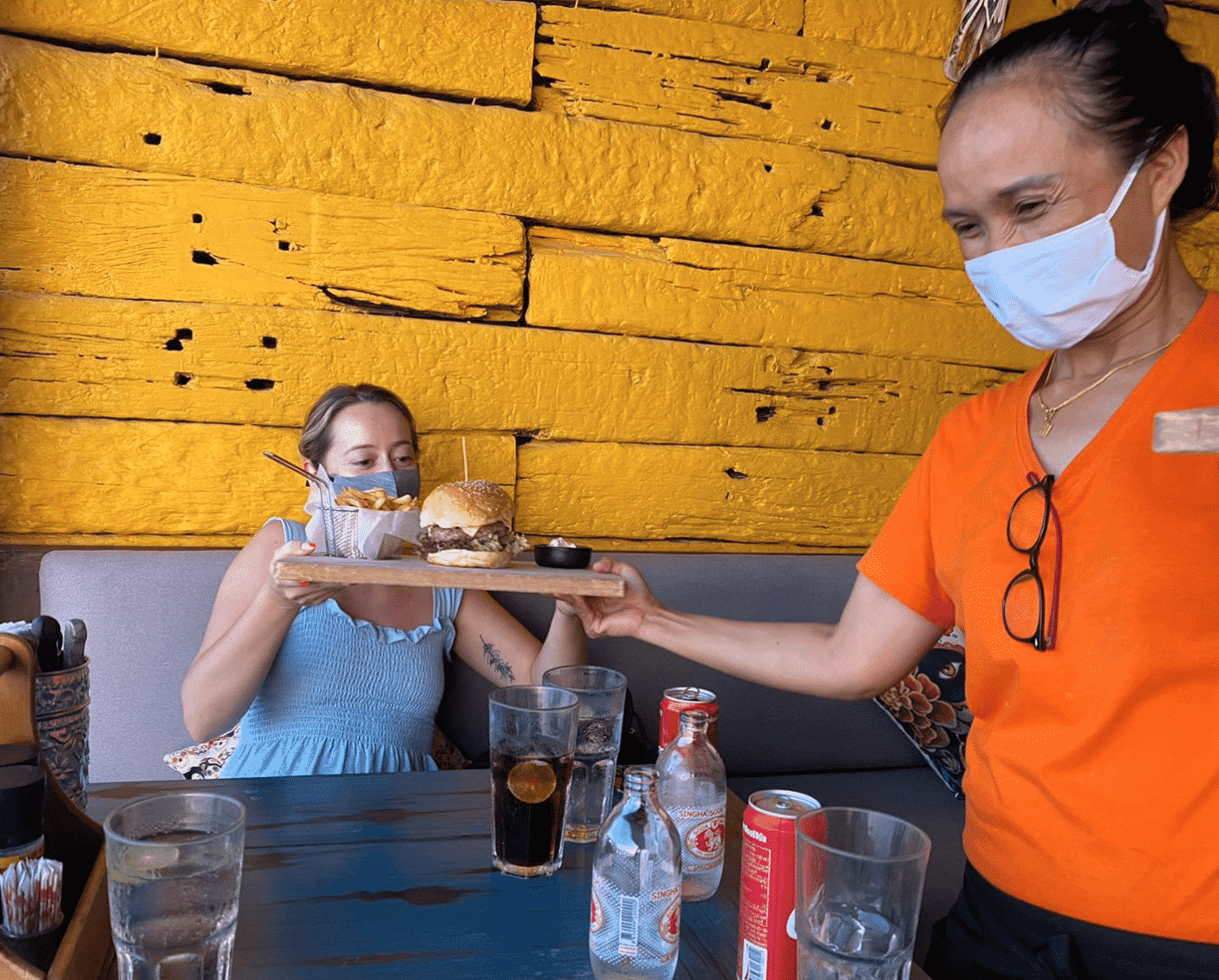 Despite a spectacular view, good food, super service and even some decent tunes, I would describe the experience as lonely. The blocked off tables. The lack of chatter. The missing buzz in the room. The lack of people watching opportunities…. It was too different, too strange.

This wasn’t a restaurant experience as we remembered it.

While the meal itself wasn’t overly expensive, it would have fed us for 3-4 days of home cooking for ourselves. That could also have been a reason for the lack of customers.

Many people reading this still in lockdown might wonder if we are spoilt brats and say that they would crave that social experience and view. We tried our best to enjoy it, but if anything it gave us a disappointing insight into a restaurant future we didn’t like the look of. The biggest indication of that was that as soon as we finished eating, we just stood up and went to the counter to pay the bill, instead of waiting for it to be delivered.

We couldn’t get out of there quick enough… 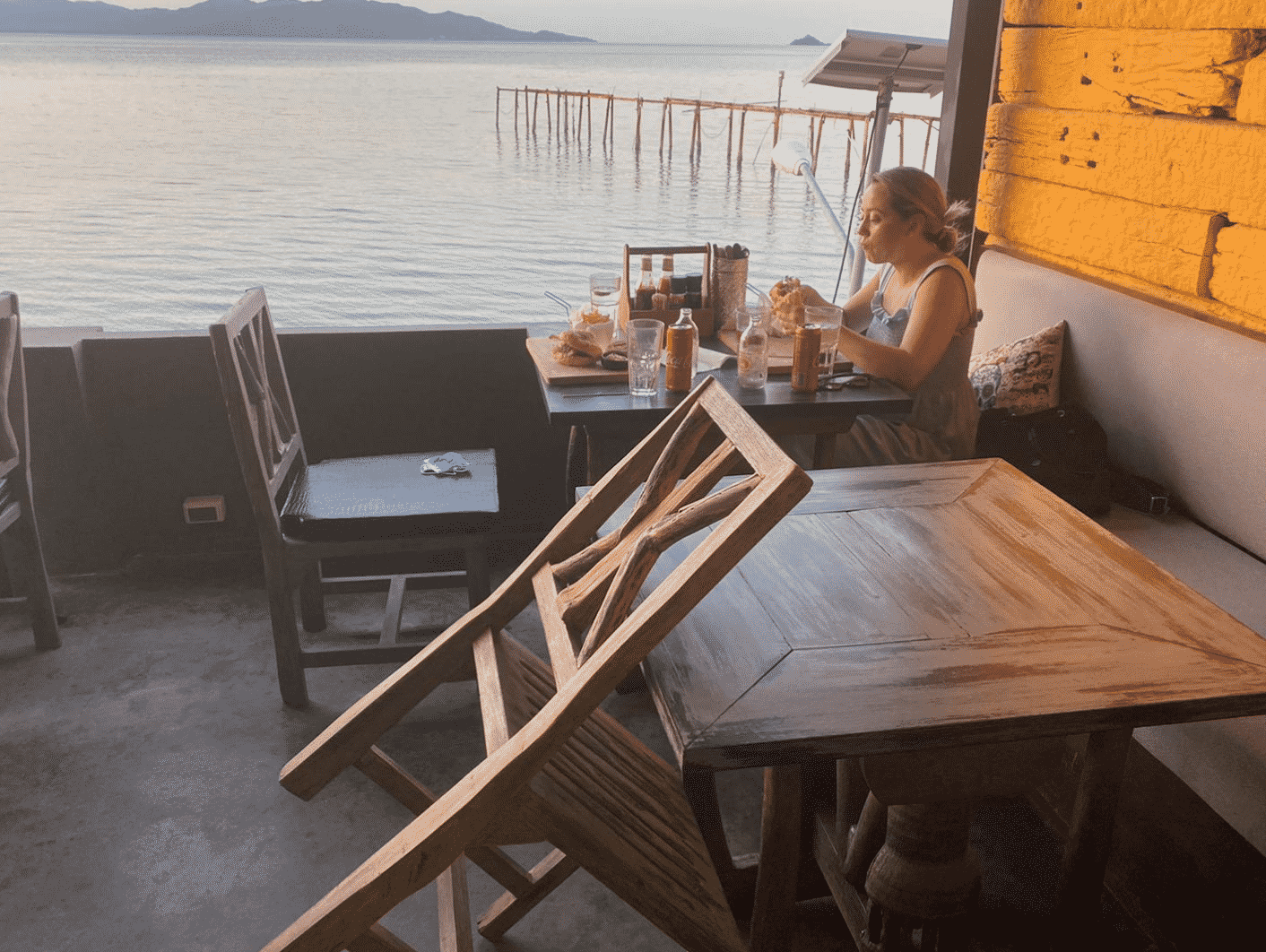 At the risk of sounding like a meal should be defined by booze, our first stop on the way home was in a fancy bottle shop. We just wanted two small, fancy beers each to make it seem more of an ‘occasion’. We would normally have wandered into a nearby bar or stayed on in the restaurant to enjoy those drinks. But dining in this ‘new normal’ has become purely functional.

Instead of making a night out of it, we stuck to the rules, bought our craft beers and took them home to enjoy on our own terrace. A special night out had lasted barely an hour. Normally, it would have been a 3-4 hour experience, maybe rounded off with an ice cream as a treat as you stroll along, or an unexpected late night after bumping into friends.

It’s important to support restaurants, but on the way home we mused that next time we’d just buy a bottle of wine and some cheese and charcuterie and sit on the beach. Or, invite a small number of friends over and have a dinner party. Both felt like they would be more pleasurable experiences.

Maybe it was just because it was the very first meal out. Places could fill up. Maybe the “new normal” will get better. But our first experience of eating out with social distancing was about as enjoyable as standing on lego barefooted. A chore, rather than the usual social release.

The following day, we decided to try again. This time we went for a late breakfast, and the experience was much more positive. After relying on takeaway coffees and home-cooked breakfasts, it was a treat to get out for the most important meal of the day.

Masks were still compulsory and hand sanitiser never more than a few feet away. Staff approached tables warily, hovering an unusual distance away, as though they were a nervous young teenage boy asking a girl out on a first date when taking the orders. Simple social interactions have changed. 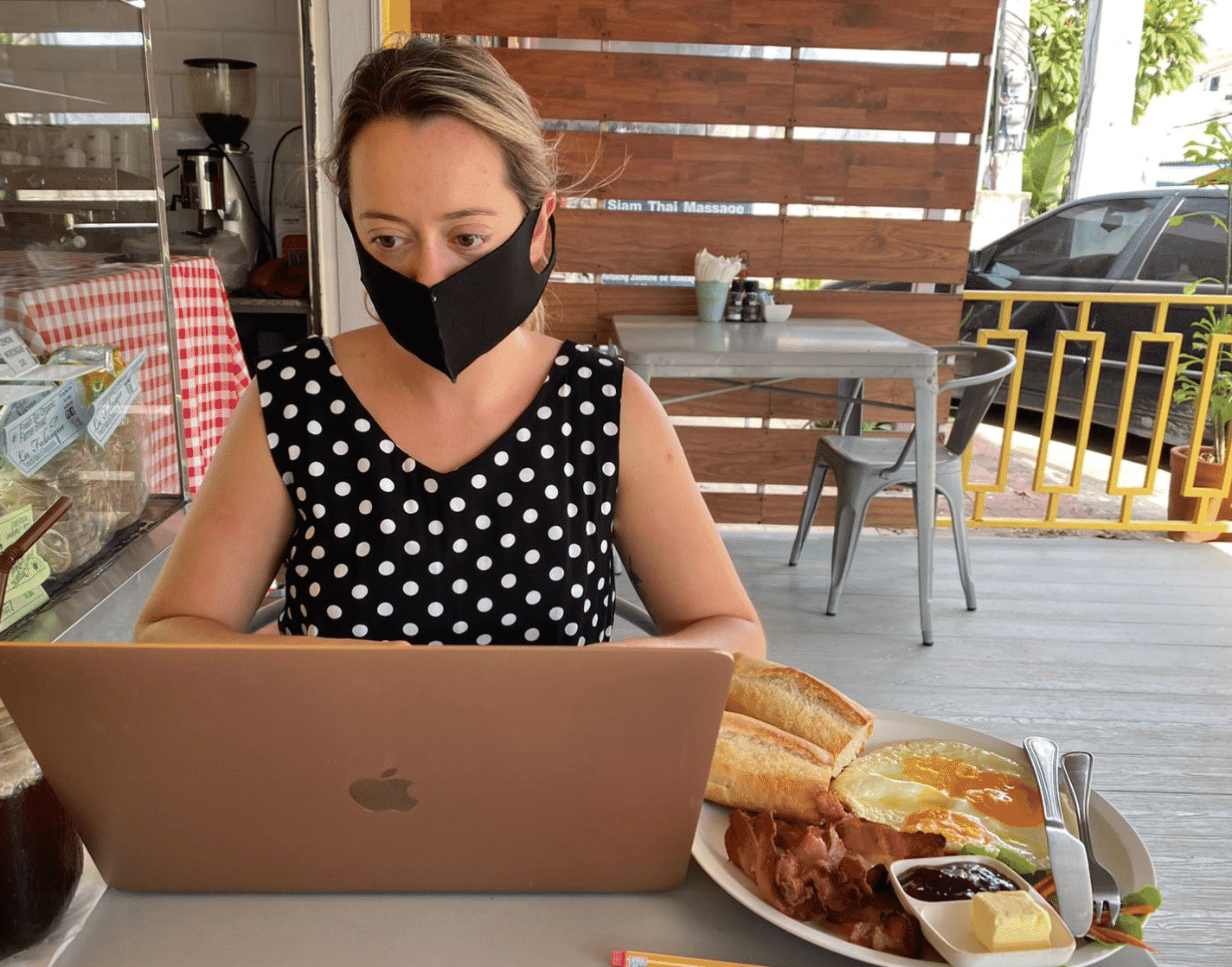 But even still, the brunch was a hit. With good, fresh coffee from a proper cup and the chance to relax for a morning, this was the complete polar opposite to the evening meal. We lingered for a second coffee, answered some emails and generally enjoyed the change of scenery. Maybe it was the lowering of our expectations that made breakfast much nicer. Maybe it’s that casual coffee outings never feel like a big event anyway.

Dare I say it, but life nearly felt normal again for a half hour.

The loud buzz of the cafe, the staff working around tables and the coffee machine hissing wasn’t quite as noticeable as before lockdown. It’s quieter, different.  But it still felt nice to be doing something which we had forgotten was so pleasurable. The one thing missing from both experiences were other customers. Both venues we dined at are normally super popular. Although we live in an area heavily reliant on tourists, the locals, expat community and longer-term tourists seem to be slow to embrace restaurants reopening. A lack of money? Fear of the unknown? Waiting for it to relax even further? Possibly all three.

Restaurants with social distancing are clearly going to have a hard time adapting. Even more importantly, so will customers. I shudder to think how much bars and nightclubs will struggle to social distance with such intimate settings. Based on restaurants, it might be impossible – especially with alcohol typically making people let their guard down and become more social.

For restauranteurs and the regular punter, I hate to say it but most of our worst fears were confirmed. Eating out has been rocked to its very core as an experience. Hopefully it will change quickly, but for now it just isn’t all that much fun. Guess we’re sticking to deliveries… 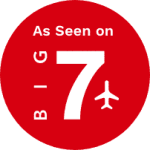