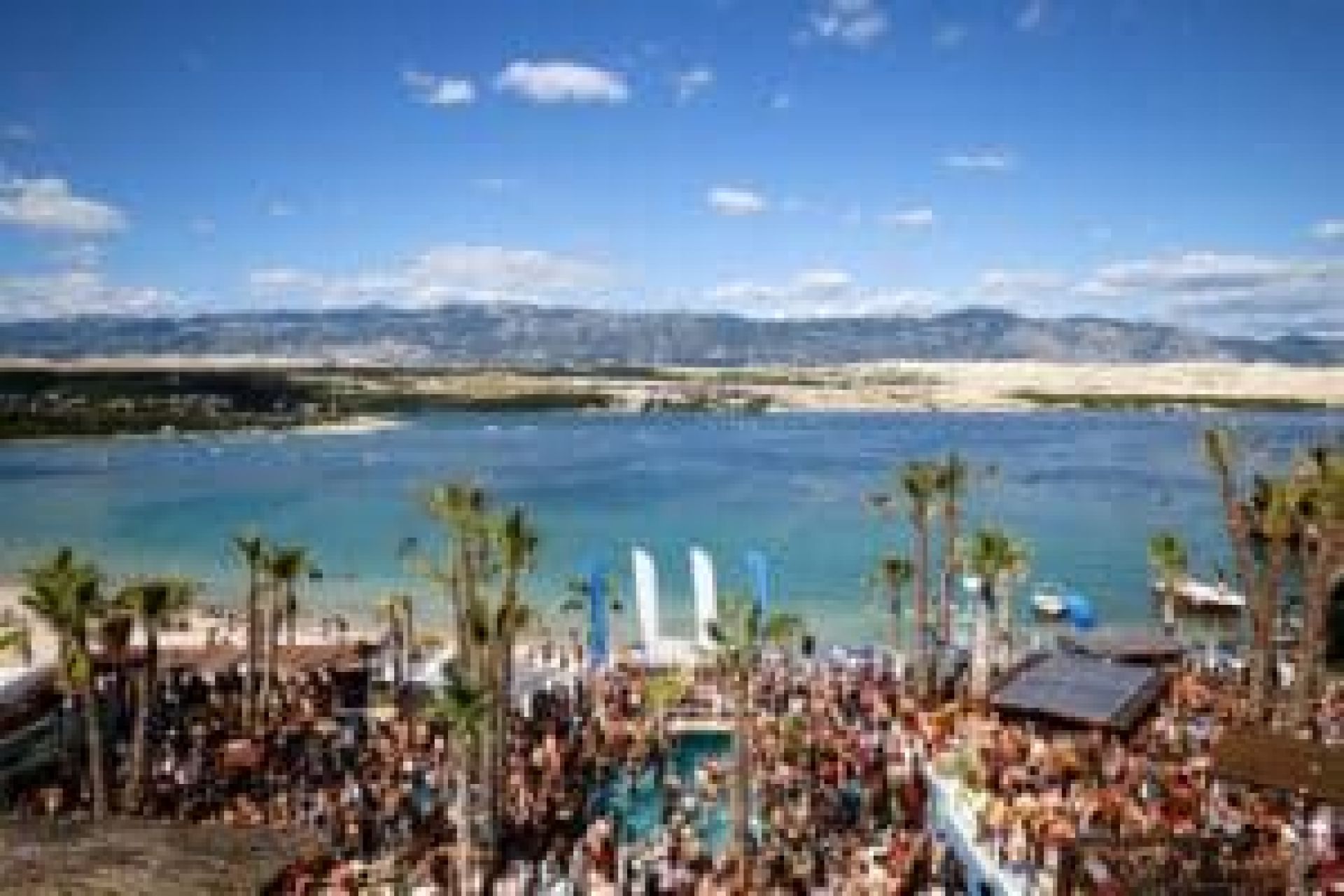 Where To Go For The Best Nightlife In Europe Next Summer

Summer might be over in Northern Hemisphire, but that doesn’t mean we have to stop daydreaming about those long days and balmy nights. We’re all guilty of scrolling through summer photos, looking back on good times had through rose-tinted glasses and a stab of nostalgia. But let’s focus on the future and start planning our dreamy European summers for next year. Picture the flowery pub gardens of London, the superclubs of Ibiza, a cocktail on the beach in Barcelona… bliss. Here’s where to go for the best nightlife in Europe in summer.

Best Nightlife in Europe Next Summer

It comes as no surprise that Ibiza has some of the best nightlife in Europe in summer. It’s the original party island, embodying everything from being a haven for hippies in the 70s, a flashy hub in the 80s, and well, we can imagine what the 90s was about. Its bohemian, happy-go-lucky, and open-minded spirit continues to draw people to this beautiful Spanish island, whether they’re looking for a party or for a yoga retreat.

The nightlife here is unparalleled. The super clubs are mainly in Playa d’en Bossa. That’s where you’ll find Amnesia, DC10, Pacha, Ushuaïa, and many more. If you want more of a classic ‘strip’ vibe, with countless bars, pubs, and clubs, head to San Antonio’s West End strip. This isn’t to be confused with Sunset Strip, which as you can imagine, is the place to be for sunset. This is where you’ll find the iconic Café Mambo, as well as many other bohemian bars with hanging plants and crochet, well, everything. 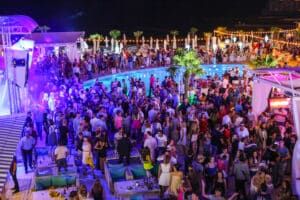 Ios is often described as a party island for people in their 20s. It’s not as raucous as islands like Zante and Magaluf, where the culture revolves around getting as drunk as possible for as cheap as possible. Ios is certainly fun, and there’s a huge party scene, but it has a different vibe. It’s also not lost its pristine beaches, gorgeous scenery, and bohemian spirit. Like Ibiza, hippies flocked to Ios after hearing about the free-spirited island. But unlike Ibiza, it’s affordable. It’s particularly popular with budget travellers and backpackers looking for a good time. There are seemingly endless bars in Ios Town, but a lot of the party scene is focused on beach parties that go on until the wee hours. There are several beach clubs and pool parties, and a lot of the time the party ends up spilling out onto the beach regardless. 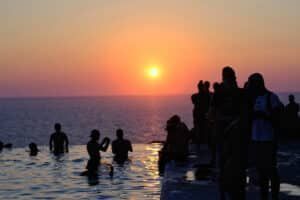 With its lively tapas bars, late-night beach clubs, boat parties, street fiestas, and music festivals, Barcelona is one of the world’s best party cities. It’s certainly one of the best places for nightlife in Europe in summer, but Barcelona is a blast all year round. If you want to party until the early hours, Barceloneta beach is the place to go. The beachfront is lined with the city’s most flashy superclubs. But once those clubs and the nearby bars close, the party continues on right on the beach for a night-long beach bash.

If you’re looking to mingle with tourists in British and Irish pubs, head to the Gothic Quarter. You’ll also find some of the best bars in Barcelona in L’Eixample, as well as some of the city’s best gay clubs. And for hip bars, cocktail joints, as well as traditional tapas spots, El Raval is the place to be. For parties on the water, head to Port Olimpic, and catch a party boat for nightlife right out on the Mediterranean sea. For great tapas bars, make your way to Gràcia, Barcelona’s trendiest neighbourhood. 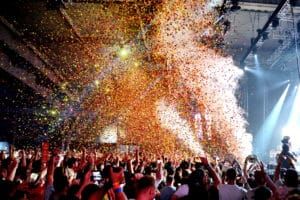 Lisbon is a vibrant hub of art, culture, music, food, and of course, great nightlife. The most popular area is the Bairro Alto District. Widely known as Lisbon’s party district, it’s absolutely packed with bars. Most of them are pretty small, so you’ll see the parties bursting out onto the streets, people hopping from one bar to another, creating an almost nostalgic atmosphere. There are bars playing a wide range of music, from jazz to live DJs. And to get a taste of authentic Portugal, head to Tasca do Chico for a live Fado (a uniquely Portuguese genre) performance every night from 8pm.

It can get pretty crowded on the narrow streets, especially during the summer months. Make a beeline for one of Bairro Alto’s many rooftop bars, such as Zé dos Bois and Insólito. Generally, people start in this district before heading to Cais do Sodré. With the highest concentration of disco bars and late-night clubs in the city, there’s no shortage of places to go. Some of the best commercial clubs include Roterdão Club, Rive Rouge, and Titanic Sur Mer. If you want something a bit more laid-back and a bit different, Pensão Amor is an interesting bar – it’s a former brothel and still has the original door. Sol e Pesca is a former fishing shop that retains the same decor, while Crafty Corner serves up the very best Portuguese craft beer. 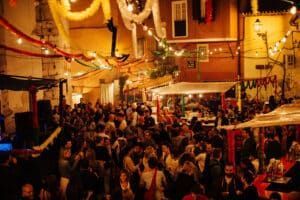 There are loads of incredible party places in Croatia – Hvar, Split, Zagreb, and more. But what makes Pag stand out? The idyllic island can be compared to the ultimate beach party destination. Nights unfold here like something out of a film. Zrće Beach is where you’ll find most of the island’s nightlife. This is also where world-famous dance festivals are held, like Hideout, Sonus, and Fresh Island. And although the festivals are top-notch in terms of dance-inducing nightlife, there is much to be discovered here. Along Zrće Beach, beach clubs like Aquarius, Kalypso, Noa Beach and Papaya firmly solidify Pag as one of the best places for nightlife in Europe in summer.

If you want a break from the crowds of Zrće, you’ll want to head to the booming Cocomo. The neon-lit venue is along the seafront of Novalja, where you’ll find plenty of bars to whet the whistle before party time. 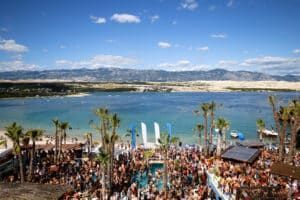 Lagos is the Algarve’s surfer town. When you’re here, you’ll hear a lot of Australian accents. It’s made for a super fun, energetic, and affordable nightlife scene. There is a big younger crowd here, but there’s something for everyone. In keeping with the surfer and backpacker vibe, head to Joe’s Garage, MJ Bar, The Star, Legends Bar, The Lionheart or Three Monkeys Bar. While there’s mostly a bar vibe in Lagos, the party goes on until the wee hours at Grand Café. It’s pretty much the closest thing to a club in Lagos, and most people end up here at the end of the night. And while it might sound like a party town (which it is), it’s not Magaluf level. The bars are in cool old buildings, with friendly bar staff that’ll start to recognise you after a few nights.

Lagos is as popular with families as it is for backpackers. The bars are in no way backpacker exclusive, and there are many quaint wine and cocktail bars that’ll suit those looking for a relaxed atmosphere much better. Taninos, for example, has an excellent selection of wine and serves up incredible Mediterranean food. For a mix between a lively atmosphere and excellent cocktails, make a beeline for Bon Vivant. The distinct building has a popular rooftop terrace, the perfect spot for engaging in everyone’s favourite past-time, people-watching. 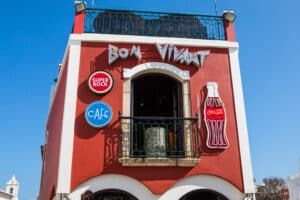 London might not seem like a summer destination in comparison to other beachy, sun-soaked places in Europe. But once you’ve experienced a London summer, you’ll get it. Beer gardens, open-air bars, clubs, and DJ events are the norm, day and night. During summer days, the sun usually shines down on the city. You’d almost forget you were in London if it wasn’t for the dazzling city views.

The wide range of night-out possibilities is colossal. Head to Soho for its ridiculously fun cabaret clubs – there are several spots to catch an old-school cabaret and burlesque show, including Late Night at the Midnight Lounge. Camden is home to grungy bars and iconic music venues, while Mayfair is the polar opposite, where it’s more of a cocktail and sushi vibe. Brixton and Shoreditch are two of the city’s trendiest spots, with plenty of cool outdoor marketplaces where you can grab street food and a beer, as well as funky cocktail spots and clubs. Dalston’s crept up in popularity recently with its super fun nightlife – it’s also where you can find some of London’s most iconic and influential gay bars. There’s so much choice, we could write a whole separate blog on nightlife in London! 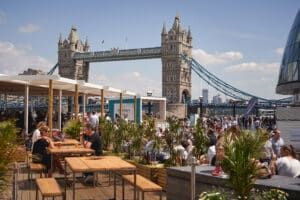 7 Of The Best Walks In Anchorage
1 week ago