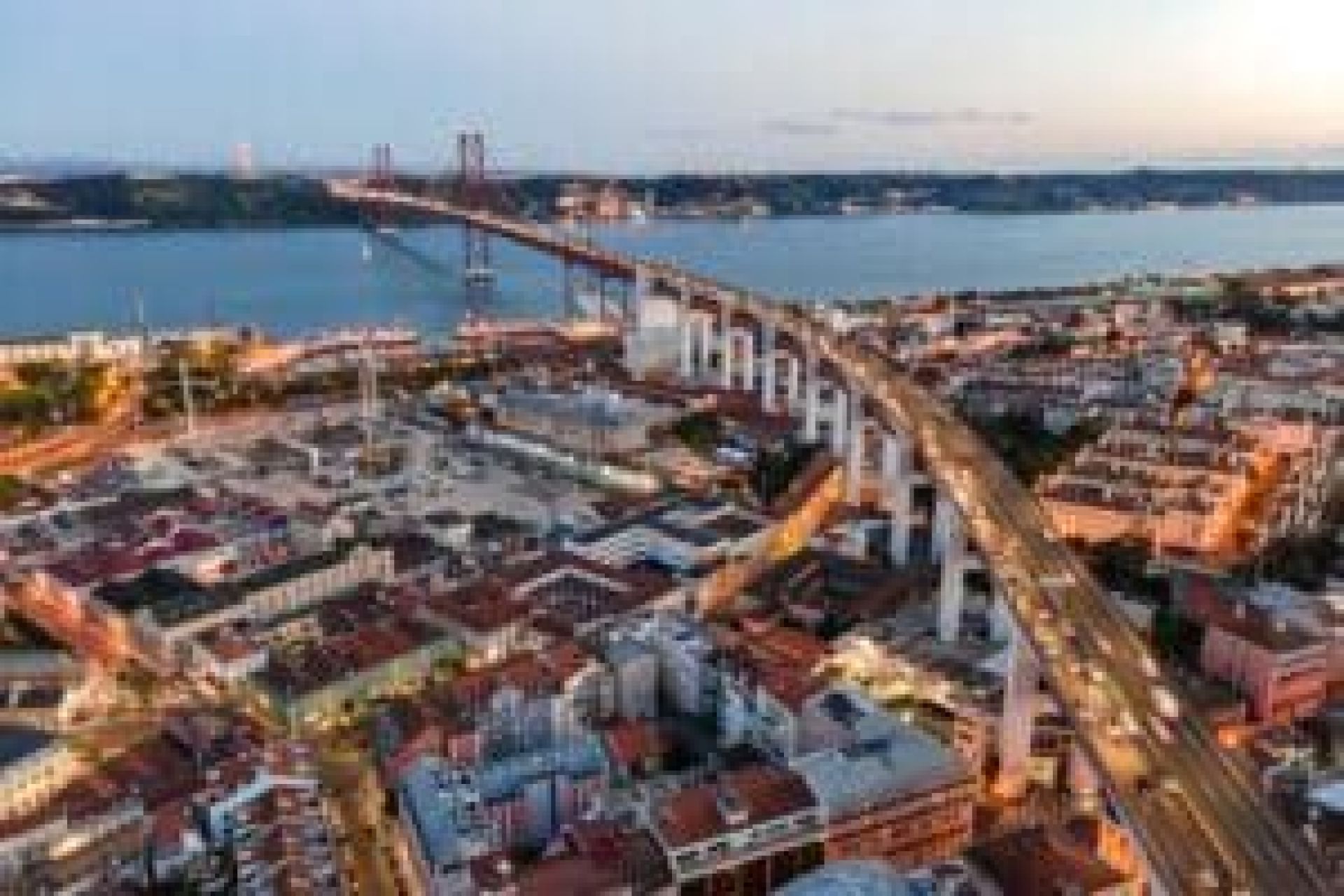 Where To Go For The Best Nightlife In Lisbon

Lisbon is one of the hottest nightlife spots in Europe right now. Not only is there countless thing to do, with more historical sites than you can shake a stick at, but it also offers a diverse and vibrant night out. The nightlife scene sprawls across the city, with each district offering something different. So, if you’re heading to Portugal’s capital for a getaway – we’ve got you. Here’s where to go for the best nightlife in Lisbon.

Bairro Alto is the main nightlife district in Lisbon, where you’ll most likely to be kicking off your night in Lisbon. Widely known as Lisbon’s party district, it’s absolutely packed with bars. Most of them are pretty small, so you’ll see the parties bursting out onto the streets, people hopping from one bar to another, creating an almost nostalgic atmosphere. There are bars playing a wide range of music, from jazz to live DJs. And to get a taste of authentic Portugal, head to Tasca do Chico for a live Fado (a uniquely Portuguese genre) performance every night from 8pm. It can get pretty crowded on the narrow streets, especially during the summer months. If you want to escape the crowds, make a beeline for one of Bairro Alto’s many rooftop bars, such as Zé dos Bois and Insólito. 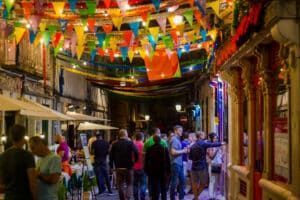 Generally, people will start in Bairro Alto before heading to Cais do Sodré. With the highest concentration of disco bars and late-night clubs in the city, there’s no shortage of places to go. Some of the best commercial clubs include Roterdão Club, Rive Rouge, and Titanic Sur Mer. If you want something a bit more laid-back and a bit different, Pensão Amor is an interesting bar – it’s a former brothel and still has the original door. Sol e Pesca is a former fishing shop that retains the same decor, while Crafty Corner serves up the very best Portuguese craft beer. Cais do Sodré is home to the famous Pink Street, where you’ll most likely end up hopping from bar to bar. 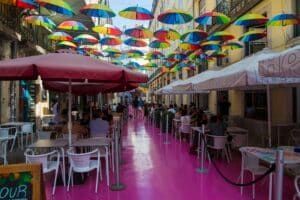 The atmosphere in Príncipe Real is buzzing. It’s one of Lisbon’s most affluent districts, with an artisan-chic vibe running through the area. It’s also a place of incredible views, so you can be sure to find a great bar with a vista around here. Cafe Colonial is an interestingly themed bar, incorporating the flavours of ex-Portuguese colonies into their drinks. The drinks are great, but the main draw is the view of São Jorge castle. Despite being a flashy and upmarket district, it’s also a place full of traditions – you don’t get much more ‘Lisbon’ than drinking a fresh beer in an outdoor square and nibbling lupin beans. Quiosque do Príncipe Real is one such place where you can embrace this Portuguese culture. 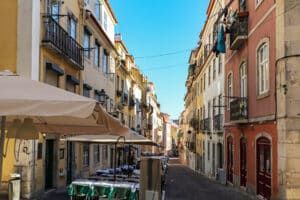 Bica is one of the most beautiful neighbourhoods in Lisbon. Rua da Bica de Duarte Belo is actually Lisbon’s most photographed street, with views of the Tagus River and the famous 19th-century tram. It’s located in the old town and has a surprisingly vibrant nightlife. There’s a mix between classy and sophisticated gin, wine, and whiskey bars, as well as traditional Fado houses and laidback pubs. Portugal is known for its port, so a trip to a port bar is always a good idea. L’Atelier Porto is a quiet but popular spot, with over 100 different types of port, which you can get with a selection of meats and cheeses. If you want to see the ‘most photographed street in Lisbon’ from above, as well as the red-tiled roofs and the sweeping Tagus river, head to the rooftop bar of Santa Bica. 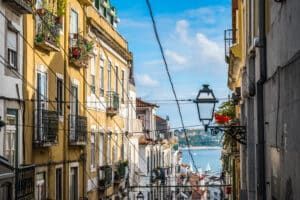 This area is slightly out of the city centre but is still within easy reach. However, you certainly feel the difference, as it feels quieter and more peaceful. That isn’t to say that Alcântara doesn’t have good nightlife, though – the area is buzzing with a bohemian, laidback soul. It’s an old neighbourhood with a lot of history, but today you can sip cocktails in New York-style bars. You can feel that New York energy in Radio Hotel, with colourful lights and electronic music. If you want something that has a more Portuguese vibe, head to Portus-Cale for vibrant graffiti-ed walls and Portuguese small plates. And for a blend of the old and the new, make your way to Quimera Brewpub – the traditional setting is met with new-age artisanal beers. 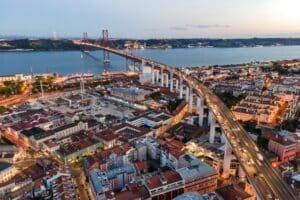 7 Portuguese Foods To Try In Lisbon 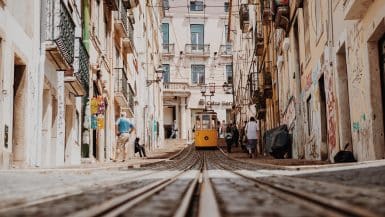 48 Hours In Lisbon: The Ultimate Guide The 7 Best Wine Bars In Lisbon The 7 Best Brunch Spots In Lisbon 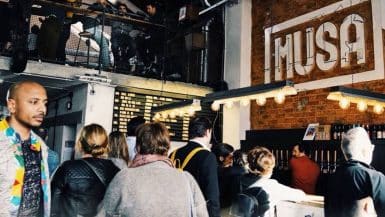 7 Of The Best Bars In Lisbon 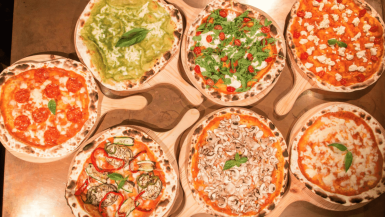 The 7 Best Pizzas In Lisbon 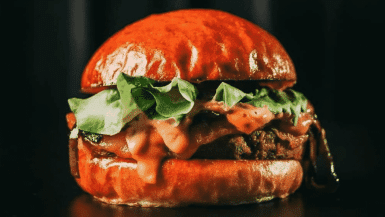 The 7 Best Burgers In Lisbon 7 Of The Best Walks In Boulder
36 mins ago 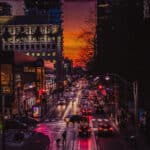 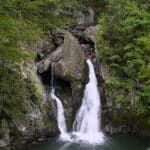 7 Of The Best Walks in Massachusetts
3 days ago 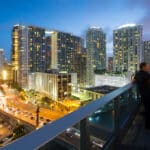